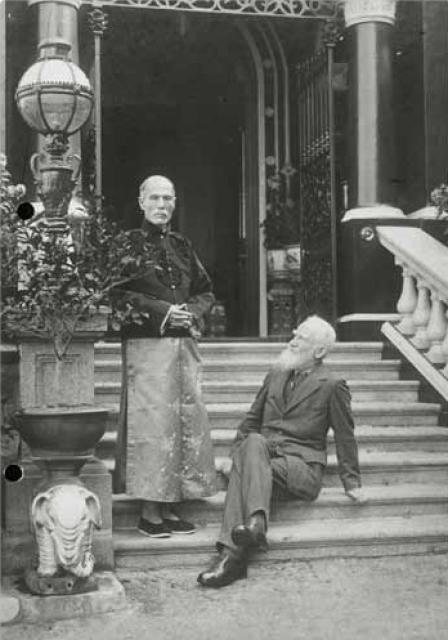 The above photo was taken on…

Mr. and Mrs. Bernard Shaw were entertained yesterday at a private tiffin party by Sir Robert and Lady Ho Tung. The only other guests were Professor and Mrs. R.K. Simpson and Major and Mrs. Robert Ho Tung Jr.

When asked after his arrival at “Idlewild” how long he could stay G.B.S. gladly gave Sir Robert his whole afternoon. He was in his best spirits, full of dynamic vitality and virility which he displayed not only in his vigorous conversation but also in his mounting three steps at one stride when going up a flight of stairs. He described himself as “literally falling up stairs.”

Mr. Bernard Shaw was much impressed by the chanting of the female Buddhist novices at the shrine in Sir Robert Ho Tung’s Peak Residence. He watched the whole ceremony with intense interest and said afterwards that he found that the music of the Suttras produced “a very soothing effect” on him. He also expressed appreciation of the Chinese vegetarian dishes on the menu.

The two septuagenarians, G.B.S. and Sir Robert appeared to find much in common. They discussed the problems of China and Japan, League of Nations, world depression, the constitutions of foreign governments, and, since Mr. Shaw was one of the two, it is hardly necessary to add, Communism. It has not been made public if any great conclusions were arrived at, but we learn Sir Robert and his guest exchanged their views on life generally in a candid and genial manner.

After tiffin, photographs and moving pictures were taken of the party who then drove to Repulse Bay Hotel, returning to Sir Robert’s residence for tea. At 5.30 the party drove down to Queen’s Pier where Mr. and Mrs. Shaw bade their host and hostess farewell, and took a private launch for the “Empress of Britain.

Bernard Shaw broke what he describes as his one "principle" in giving his autograph during tiffin, and he also signed the visitors' book at "Idlewild."

Interestingly on page 12 of the same newspaper, G.B.S. absolutely detested his first name George and preferred to be called "Bernard Shaw" or "G.B.S."