This morning I was medically examined once more, on this occasion by the special medical board at the hospital. Every man in camp is being examined at the request of the Japanese authorities. First my blood pressure was taken and I was examined for hernia by Dr Youggski (or some such name – he is a British naturalised Russian). This time, my blood pressure was 117/70, an increase on the last when it was taken about a month ago for the labour roster; so my digging must have raised it. Youggski told me it was very good for this camp. Then I appeared before a battery of doctors, Drs Valentine, Uttley, Newton, Deane-Smith and Prof. Digby. They merely questioned me, tapped my knees, looked into my mouth and then dismissed me. So I presume I am alright so far as the general health of the camp is concerned, though I am told that by now not a single person in camp is considered to be really physically fit.

At the moment I am suffering from a small boil in my ear which is most inconvenient, not to say painful. It is due, I think, to getting water in my ear the other day. Fortunately it is just inside my ear and not near the drum. At present the Lord seems to have visited upon numerous people in this camp one of Job’s many afflictions, namely a plague of boils. It may be partly due to the season of the year but I expect it is chiefly due to the poor state of health of many people. Well thank heavens we are in Hong Kong and not, let us say, in Singapore, for in this location we do at least get a pretty chilly winter which must make a lot of difference to the general health of Europeans here.

It seems a pretty paltry amount and in peace time one would get at least 5 times the amount. However, it is a Godsend now. Soya beans are rich in protein value; onions make all the difference to the taste of camp food. Onions are the only commodity that has fallen in price recently at the canteen; two or three months ago they were Y1.00 (pdv£5.60) per lb.

I can find no trace whatsoever of my Westminster Bank cheque book, which is a pity, for Yvonne cannot now buy the silk underclothing from Mrs Hall. I was sure I had brought it into camp with me, but evidently not.

Swim with B pm. 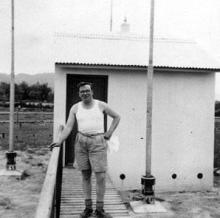