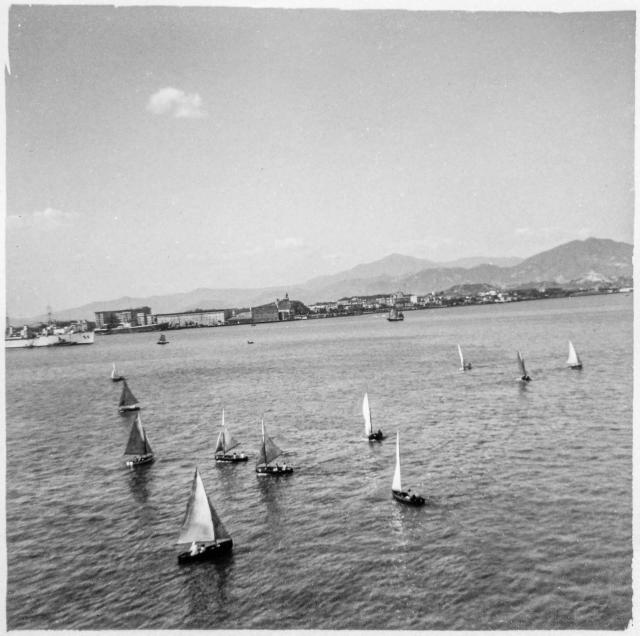 I bought one of these dinghies in 1983. For HK $ 3,000. There were four or five still ok for sailing. Very heavy and extremely well built. Dry as a bone. I would think it may still be there moored at the far end of the pontoon. Her name was Luffy, not my choice. The owner before me had installed bowsprits on them.

These ones pictured were probably built before the war and somehow revived. Or rebuilt by the very industrious Chinese. They are boat builders.....I paid an amah to look after her. It was a bit of a racket but hence the were still around.

A lot of fun. Two crew and a passenger if pushed. The guy who uprated them brought a lot of experience and enthusiasm to the class. My contribution was to have her painted and a new set of sails before I sold her for a similar amount three years later. A small amount in leu of a club membership.

I thought they were about twenty years old. But I could now be wrong.

If you bought a boat you didn't need a membership. The requirement was to sail.

I sailed every Saturday 2:00pm till 5:00pm. Start at the club house across to Hung Hom Flour Mills down Kia Tak runway and out along to Tai Koo. Then repeat or go straight in. A nice afternoon chatting to my friend from HSBC or someone else who didn't want to commit to sailing every weekend . There were a lot of non owners who took their luck with learners like me.

Yes these dinghies are probably pre war and revived after the war.

Thanks very much for the…

Thanks very much for the additional details, Nick