Current condition
In use

Waterfall Bay Park runs along the shoreline in front of the Wah Fu estate. At the southern end of the park is a collection of Chinese gods - worth a visit if you're in the area. Then if you follow the park to its northern end you'll see the small bay and waterfall that gives the park its name.

Here we pan from the waterfall on the right, round to the peninsula and pillbox 6. In the background you can see the towers of Bel-Air on the Peak, as Cyberport is just over the other side of the hill.

The people you can hear in the video were fishing. They say you can walk across the bay at low tide, but when the tide is in you have to go up over the top, behind the waterfall. As the tide was definitely in I walked back up the steps, and climbed over the fence to find this pretty stream.

Don't forget how high that waterfall is - so don't get too close to the edge!

There's a well-worn path from the park, across the stream, and up to Cyberport Road. (If you're starting from that direction, look for the point where the concrete barrier on the edge of the road changes to a metal fence - you'll see the path leads down to the river from there. Cross the water and you're at the edge of the Waterfall Bay park.)

The oldest image of this waterfall is a watercolour by William Havell dated 1816. At that time the waterfall was known to Western sailors as a place to replenish supplies of fresh water. Click here to see the watercolour (the audio guide on that page is also worth listening to if you are interested in the history).

There's another picture in the library collection, this one a photo dated to the late 1870s. [Use this search form, check the 'photo' box, type 'waterfall' as the search text, and click the 'search' button]. The description given by the library suggests it is a photo of the waterfall that runs into the sea, but I think they are mistaken. The cliff-face in the photo looks different, there is a bridge that shouldn't be there, and there is no sign of the sea in the foreground. So it may be part of the same river that runs down to the waterfall at waterfall bay, but I believe the photo was taken elsewhere. Could the bridge be the one that is just above the head of the water in the current Pok Fu Lam reservoir? If the reservoir was drained would you see the waterfall shown in the old photo? 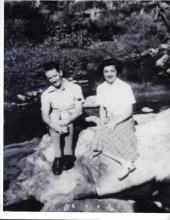 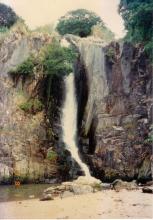 Over the weekend I went back to Waterfall Bay, this time with the family. We started off with a visit to see the statues, played a while in the park's playground, then walked along and down to see the waterfall.

The tide was out on this visit, so it looked quite different:

When we first arrived we could see this bright blue bird, perched on a rock near the bottom of the waterfall. My camera strained to zoom in, but it looks like a kingfisher to me - can anyone confirm?

The girls always enjoy a scramble around on the rocks, so with the tide out we made the most of them. In several places were these tightly packed groups of sea snails:

We went back to the beach to collect some shells and take a closer look at the waterfall. Then it was back up the hill and over the top of the waterfall to head down into Cyberport for lunch.

Strange enough, I was in the area on Sunday afternoon as well. After walking by the Pillbox and take a few photographs, I walked along Wah Kwai/Wah Fu Estates, then follow Victoria Road, then Cyber Port Road, Sandy Bay Drive, Victoria Road and straight to Kennedy Town on foot.

I also stopped by the top of the Waterfall at around 1740 hrs. To be frank I found the water a bit foul there. Anyway, it's much better then half a century ago as there used to be the 'Dairy Farm' up stream, with lots of cow cakes...... :-P

T, that's a good long walk. Our two girls were tired out by the time we reached Cyberport Road, so we just jumped in a cab for a short ride down to the Cyberport complex.

There's a good Hedda Morrison photo of the Dairy Farm area. I'd always struggled to work out where that photo was taken, as I couldn't recoginse the hill. I think it was where 'Bel-Air on the Peak' is now. I guess the top of the hill was chopped off and used to reclaim the land in Telegraph Bay, providing the land that Cyberport stands on now.

After staring at Morrison's photo as well as it's descriptions for quite a while, I believe the photo was take somewhere very close to the Bethanie. The location should very likely be somewhere on a slope between Victoria Road and the Bethanie. That area was well within the Dairy Farm limits.

I could not recognize the small hill as well and I could not recall how it was supposed to be in the 70's. But you are probably right mentioning the site of Bel Air as the Cyperport Road is mostly a bridge curving around three sides of slopes.

I think we have to check with some older maps for terrain back then, however I believe we could make out an approximation base on the line of sight. The edges of the photos showed good reference points in Lama Island.

not had a chance to read

Books for the field trip:

Waterfall Bay after the rain

Lookingat this you can imagine the way it looked in the old watercolour linked to above. Though as Thomas notes: "I could only imagine how it looked like two hundred years ago........  It's flow had diminished after the construction of the Pokfulam Reservoir, I think.  I wished I could afford the time to go right after that black rain storm signal was down the other weekend, however.  It would most likely to be more spectacular in its full glory. "

I went past the other day on a junk and took a snap. It was high tide so not much in evidence (certainly no Kingfishers) other than the waterfall and the pill boxes.

I found some photo's I took last year after a Red Rainstorm.

Thanks for the photos. When out hiking, I often see a wide riverbed with just a little trickle in the bottom, and wonder what it must look like in the summer rains.

Thanks for these photos of Waterfall Bay and Wah Fu. They're great. Just wanted to let you know that I've posted half a dozen short films about Wah Fu Estate on youtube and my blog.

I live near Wah Fu and am constantly drawn there.

Took this while en-route to Cheung Chau the other day.

Would try to do it again after heavy rain if I got the chance.

As stated on this thread, the name (Xiang Gang/Heung Gong/Hong Kong) as in 'Fragrant Harbor' is often credited as coming from Aberdeen (which bears the name) and more specifically Waterfall Bay itself, where these early sailors stocked up on fresh water.

However, this Lonely Planet Article ( https://www.lonelyplanet.com/china/hong-kong/history ) states that the etymology of the name comes from  " the scent from sandalwood incense factories that wafted across the harbour from what is now Aberdeen at the western edge of the island. "

I believe those incense factories, despite crude ones, were a bit more wide spread.  I remember there is another thread here at Gwulo talking about possible traces of such factories in Tsuen Wan Lo Wai, along one of the streams, obviously using the stream to run the mills.

There is yet a place in Tai Wai called Heung Fan Liu, which likely used to be a small concentration of such factories, also using the Shing Mun River for the mills.  Heung Fan means the end product of the incence in powderd form and Liu means squatters.

I suspect there are likely more of these factories around.  On the other hand, I remember reading some books or articles that those incense was called Goon Heung (莞香).  (Hong Kong was once under the the jurisdiction of Tung Goon County(東莞)).  In this respect the industry must be even more wide spread in the region.

What then would suggest that

What then would suggest that the namesake of HK came from Aberdeen?  Perhaps waterfall bay/aberdeen (being the first place recorded) first got the name (regardless of wear the fragrance came from) which later spread.

From the captioned book by Austin Coates.

”In the days when the trade lay between Macao and Whampoa, in the heyday of the tea trade, Europeans had little reason to go near Hong Kong and its neighbouring islands, which were off the beaten track. As the papers of the Amherst mission show, by 1816 the British knew about Hong Kong, which had already acquired its inexplicable name (in Cantonese Heung Kong, meaning Fragrant Harbour)*. “

* Chinese do not usually give names to islands as large as Hong Kong, i.e. to islands which cannot be seen to be islands. Minor islands were usually identified by the name of the principal village on them. There was no village called Hong Kong, and it can only be assumed that the appellation was a fisherman’s name for a stretch water adjacent to Hong Kong Island, and where there was good fishing. The name applies to water, and not to land. The most likely place is on the south side of the island, between Aberdeen (Heungkong Tsai) and the protecting islet of Aplichau; but this has not been definitely established.

If you could read Chinese, someone created this Wiki entry which may have a bit more information. 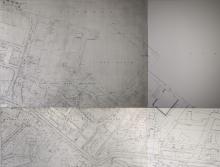