If you are looking from the beach out to sea, this pillbox is at the back of the beach on your left.

As you walk towards it you'll see it has a metal door in good condition (not the original). I guess it is used as a store room for the people working at the beach. 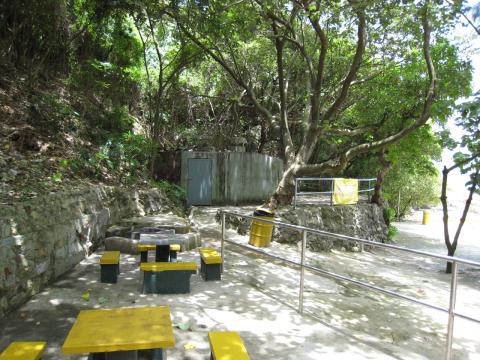 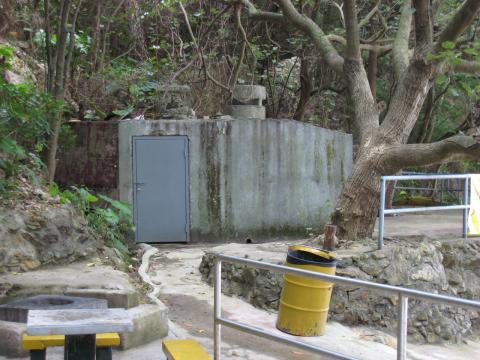 Looking at the front you'll see these two loopholes. Their metal doors are still intact, though the hinges seem frozen with rust. 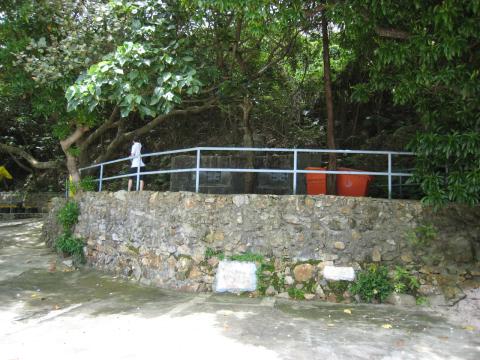 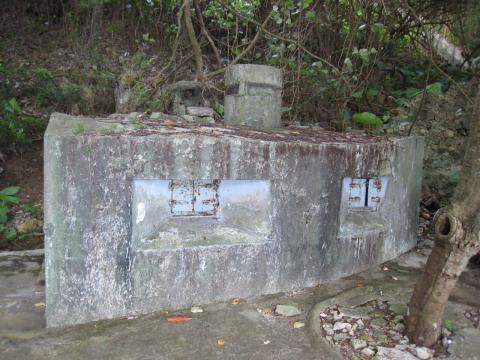 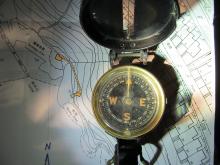 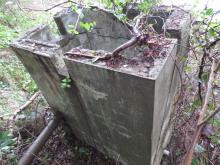 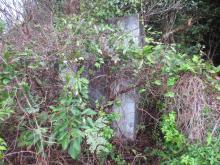 My post of 3-3-2015 at www.gwulo.com/node/19380 speculated that concrete posts and small "r" shaped structures at South Bay were part of the defences around the PB and LL thereat. Rob responded, saying that much of the perimeter fence around PB & LL 30 at Turtle Cove was still in place when he visited some years ago. Last week I went to Turtle Cove to see if anything that remains is the same as at South Bay.

The map at www.gwulo.com/atom/16899 shows the layout with the PB, LL and their connecting walled path highlighted in yellow. The PB and LL are at the north and south ends of the path respectively. The small yellow square to the left of the LL on the map, in reality is on the shore well below the LL and does not appear to be a military structure.

I began by trying to find the point where the perimeter fence meets the shoreline to the south of the LL. An easy scramble of about 100 meters brings you to some old structures dotting the rocks. They're positioned just above the figure "3.0" on the map.

They're roughly constructed, of rock, brick and cement and arranged in a line from the sea up and across the rocks.

The first and second inscription clearly read "GUN". Whilst the normal meaning of the word is obvious, I wonder why it was written here? With a pillbox being so near, a reference to the guns that it once housed would seem likely. The third inscription is vaguer, reading "SLTS" or perhaps "GLTS". Does anyone know what it means?

The fourth inscription is on the next structure, but I can't make out what it says.

The highest of these structures has no inscription, but the remains of what may have been a fence post is set in its top.

The jungle starts immediately above the coastal rocks. Nestling in the undergrowth a few meters in is this.

It's about 2.5 meters tall and made of concrete. A pipe enters it from the back.

Inside, it's empty apart from pipe fittings.

It looks like a water tank, but there's no obvious need for one here. Does anyone know what it is?

An even stranger construction sits on a rock a few meters away across a gully.

I've no idea what it's doing here. Can anyone suggest its function?

A line of concrete fence posts starts a few meters above the suspected water tank. They're the same type as those seen at South Bay (www.gwulo.com/node/19380 ) with metal fastenings for a wire or barbed wire fence on some of the posts.

I followed the line of fence posts as far as the undergrowth allowed. They climb the hillside before disappearing into thick bush, Next they're found contouring the slope above the PB and LL, and eventually drop down to the back of the beach to the left rear of this playground.

Tracking the route of the fence posts around the site, are numerous small "r" shaped structures. They're in two lines, one inside and one outside the fence posts, and are identical to those at South Bay.

As the "r's" follow the fence posts, their function should logically be related to the fence. I can't think of any purpose for them other than as anchor points for rolls of concertina barbed wire forming part of the perimeter defences around the PB and LL. Alternative suggestions are more than welcome.

It's only an old fence, but interesting nevertheless. Thanks to Rob for the reference.

Found another of those 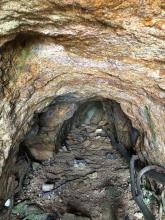