Probably built in the 1920s, Ng Yuen (吳園) was the private residence of
Mr Ng Tze-mei (吳子美) (1881-1939), a prominent figure in Sha Tin. Ng
had initially been living in the walled village of Nga Tsin Wai (衙前圍村).
From 1928, he started living in Sha Tin presumably because of the good
fung-shui setting of Ng Yuen and its immediate environs.

Having completed an earlier education in Queen College (皇仁書院) in
Hong Kong, Ng pursued further studies in architecture. Together with his
elder brother Ng Tze-chor (吳子楚), he ran a company named Tung ShingConstruction Co. (同盛建築公司) at No. 14 High Street, Western District, in charge of building projects in Hong Kong.

Ng Tze-mei was also a notable philanthropist. He was active in charity,putting tremendous efforts in taking care of people in need. For example, he donated to establish an outpatient clinic in Pai Tau Village (排頭村), Sha Tin, in the benefit of local villagers. He also provided for coffins to be disbursed, free of charge, to the next-of-kin of the deceased of poor families.

Local informants revealed that Ng Yuen had been occupied for use by
the Japanese during wartime (1941-1945). After the war, the building reverted to its original function as a private residence until the 1970s, when it was rented out to another family and then became vacant shortly thereafter. 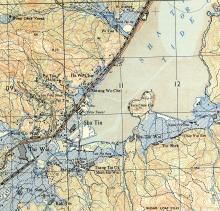 There are more notes and a couple of photos over on Phil's blog.

new link to replace the one above: