After we finished typing up the 1902 Juror's List, I wrote:

There's a new company, Punchard Lowther & Co. They seem to have sprung from nowhere, yet there are already 18 jurors listed as working for that company, making it one of the largest companies on the list. I haven't heard of them before, so I wonder what's their story?

Punchard, Lowther and Co the contractors for the Naval Yard Extension Works, at Hongkong, are progressing very favourably with the filling in of the foreshore and with commencing the driving of piles for the dam of the dock.

Just wondering if you were able to find anything more on this company? I know they got the naval yard extension contract and have been able to find bits and pieces on them regarding this. Does anyone have a good source on their employees in Hong Kong? I'm just trying to figure out how my great grandfather ended up working for them as an electrical engineer when he was supposedly born in the states and had family and connections in Canada. Any help would be appreciated. Thank you.

re: Punchard Lowther and Co.

I just searched for the names Punchard, then Lowther in the Hong Kong Government Reports Online. The results cover the years 1902-9. There's one additional mention in a 1915 report, but that just refers back to an incident in 1908.

My guess is that the company was just formed to handle the naval yard extension contract, and then closed once the contract was finished.

Though here's a mention of "Punchard, Lowther & Co, Waterford & Hong Kong", so maybe they were headquartered in Ireland, and just opened a branch in Hong Kong when they won the contract?

This photo shows the extension project in progress.

Please let us know if you find out any more about them.

I research family trees for my maiden name Punchard. William Henry Punchard born 1835 Harberton, Devon, England to a farming family, moved to London in the 1860's and became an engineer and contractor.  His sons William Charles, John Henry and Henry Edmund also became civil engineers and formed Punchard, McTaggart, Lowther & co.  They became one of the largest construction companies of the Victorian era building railways, docks and other projects all over the world. Henry died in Brazil aged just 25 in 1887. Their head office was in Cannon Street, London.  The Institue of Civil Engineers in London may hold records? WH Punchard died 28 December 1891 from influenza.   I hope this points you in the right direction! Regards Beverley Davies nee Punchard

Thanks for the extra information. Good to find out it was an international company, and not just a local Hong Kong company.

A search for 'Punchard, McTaggart, Lowther & co.' found an entry in the London Gazette for 5 Jan 1900, stating that the partnership expired on 31 Dec 1899. 'The firm will be continued for the purposes only of the completion of Contracts now in the course of execution'.

It looks like Punchard & Lowther formed a new partnership shortly after that.

This from "The Engineer" London,  1892-01-08 - I was researching railways in Nova Scotia. This particular W H Punchard was a very well-known man in the international construction field as the head of a very large company. The Hong Kong unit was merely a subsidiary, I would adjudge.

"WE regret to have to record the death of Mr. William Henry Punchard, of the firm of Punchard, McTaggart, Lowther and Co., of Cannon-street, which occurred on Christmas Day. His unexpected death at the comparatively early age of fifty-six removes from our midst another of the leading Contractors of this  country, who, during the last thirty years, in conjunction with his various partners, has been actively and continuously engaged in the construction and development of public works, not only in this country, but also—more recently—on the Continent of Europe and abroad. Amongst the numerous works constructed by Mr. Punchard and his co-adjutators  we may mention a few as follows: — Bedford and Northampton Railway, Great Marlow Railway, West Lancashire Railway, the Windsor and Annapolis Railway, Nova Scotia, New Glasgow and Cape Breton Railway, Nova Scotia, the Sackville-to-Moncton, New Brunswick section of Intercolonial Railway of Canada, Eastern Railway of Sweden, Rio Tinto Railway of Spain, Malta Railway, Tasmanian Railway, Great Northern Railway of South Australia, North-Western Railway of Uruguay, Great Western Railway of Brazil, Buenos Aires and Campana Railway, the Callao Docks, Peru—in conjunction with the late Mr. Thomas Brassey. More recently Mr. Punchard and his present partners constructed the Grand National Tramways of Buenos Aires, and the magnificent harbour, just finished, of La Guaira, for the Venezuelan Government. They are also on the eve of completing a contract with the Government of Siam—in which they have been associated with Lieutentant-General Sir Andrew Clarke, R.E., G.C.M.G., &c.-—-for exploring and  surveying a line for the proposed railway from Bangok to the Chinese frontier—over 800 miles—a work of a most difficult and arduous nature, upon which, for the last three years, they have had a large staff continuously engaged. The actual survey work of this was only completed a few months prior to Mr. Punchard’s death. Thoroughness marked everything to which Mr. Punchard put his hand, whether as a financier, a contractor, or in those agricultural pursuits in which he took a lively interest during the very slight periods of leisure he allowed himself.

Thanks Bill. I've just done a

Thanks Bill. I've just done a quick search for "Punchard" in https://www.icris.cr.gov.hk/csci/search_company_name.do and didn't find any results. So perhaps there wasn't any local company created, they were just group from the main company working here until the project was complete. 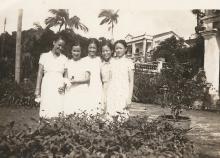