I figured I should start off with my favourite film because it's also the film that got me interested in Chinese culture and, ultimately, has led to me being in Hong Kong - albeit indirectly.

It was made in 1973 as a joint production between Golden Harvest and Warner Bros and was the first such international co-production. It cost US$800,000 to make - making it one of the highest grossing films of all time (relative to cost). It was eventually released in August of 1973 and shot Bruce Lee to international stardom, though he had actually already died in July 1973.

This was the second post office for TST, see Moddsey's notes below. There's a building in about the right position in this 1900's photo, but it's not clear if it's exactly the same one:

A question for you - how many railways and ropeways have there been in Hong Kong?

For 'railway' I'll include any place where there were wheeled vehicles running on metal tracks. A 'ropeway' is what we call a cable-car today. And let's say they had to have been built before 1950, to exclude more recent constructions like the MTR, or the Tung Chung cable car.

How many did you count?

I came up with eight railways, and three ropeways. Railways first:

If you're visiting for the first time after reading the article in today's SCMP, hello! Here are links to the other resources mentioned in the article:

Here's an overview of what there is to see on Gwulo.com.

You can see a list of popular articles up on top-right corner of this page.

Or you can browse this list of all the articles on Gwulo.com. Each article covers some aspect of Hong Kong's history.

Try the photo map page if you're looking for a photo of a certain area or building. 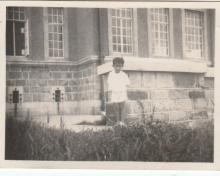