I have been trying to look for landmarks and places related to the East India Company in Hong Kong. I have a few ideas and I am wondering if anyone has any more suggestion/addition to the list below?

For locals to get their fix 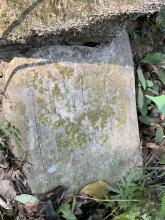