Rupert Lonsdale, later Canon Lonsdale, was one of the officers who served on HM Submarine L3 in the 4th Submarine Flotilla on the China Station in 1928-29, having first served on the X1 in 1927. In May 1939 he came back to the China Sea in command of Seal a Grampus class submarine, but returned to the North Sea patrol. Seal was given the task of laying a minefield in Kattegat, but was bombed by a Heinkel. Diving to evade e-boats Seal hit a newly laid minefield and was damaged. 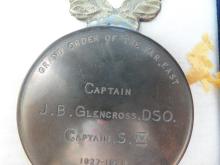