A tale of two xenophobic intellectuals...

Now, where to start with the disastrous Governorship of Sir John Bowring, a liberal intellectual who managed, in the course of his Governorship, to launch the most unsucessful invasion of Russia ever, to have a poisoning scare and terrorism in Hong Kong, to start a war with China and to bring down his own Liberal government in Britain?

Sir Samuel George Bonham, whose wholly sucessful Governorship I have touched on above (he was nicknamed "the model Governor" and was so honest that he refused to draw his own salary until the Colony's budget was in balance), maintained that trying to learn Chinese drove a man mad.

His predecessor as Governor, John Francis Davis, and his sucessor, John Bowring, both spoke Chinese. So did Harry Parkes...

Bowring was the sort of intellectual who cannot conceal his disdain for lesser intellects...

What made matters far worse was that Bowring's opposite number as Viceroy of Guangdong and Guangxi, Yeh Ming-cheh, was somewhat similar man...

Elsewhere in China, after the first Unequal Treaty, Western merchants were allowed ashore and more or less given the run of the Treaty Ports, but, in Canton, Yeh was still trying to play by the Old Rules, and the British Canton traders were all opium dealers and were stroppier than western merchants elsewhere.

Yeh made the point that he could not guarantee the merchants' safety. Bowring said he wasn't trying. One problem was that the Treaty that ended the First Opium War was translated rather badly. The Chinese text differed from the English...

This annoyed Bowring... for the three years that he spent as HM Consul, Canton.

When he went back as Governor of Hong Kong, he was very specifically instructed not to use force...

His first act was to take the Royal Navy contingent off to Petropaulofsky and invade Russia... this resulted in a resounding defeat..but never mind that...

The Arrow was a lorcha, that is to say, a sailing vessel with a European type hull and a Chinese rig. Lorchas were the everyday means of sea transport in and around the Pearl River delta and as far as Manila; they sailed better than junks but needed smaller crews than Western rigged ships.

The Arrow had been registed at Hong Kong under the British flag under what seems to have been a bareboat charter register type system; at all events her British registration had lapsed.

The Canton police force raided her and arrested her crew for piracy and smuggling. The crew were almost certainly guilty but that is irrelevant. Harry Parkes, who was Consul at Canton, demanded the release of the crew.

Yeh released nine out of the crew of twelve.

Parkes referred the matter to Bowring, who issued an ultimatum.

End of story? Of course not!

Bowring demanded an apology for this "insult to the British Flag" (which the Arrow was not flying at the time). Yeh refused.

Yeh burned down the British buildings in Canton..

So the two men were in effect carrying on a private war, against the express instructions of both their Governments.

Yeh put a price on British heads, leading to a spate of murders and kidnappings in Hong Kong.

And, of course (this is Hong Kong we are talking about... ) an outbreak of grave robbing from Hong Kong's European cemetery...

Since Yeh Ming-Cheh was now officially sponsoring terrorism, terrorism was what Hong Kong got...
...in the form of the Great Bakery Incident of the 15th January 1857....

At this time, the population of Hong Kong numbered around seventy thousand Chinese, two thousand Indians and five hundred Europeans.

Yeh Ming-Chen reasoned that Europeans eat bread; Chinese eat rice. His agents suborned Ah Lum, who ran the only bakery in Hong Kong, into putting arsenic in the colony's bread..

Ah Lum did so, but erred on the generous side with the quantities.

Then, at 8 am, after the day's bread was baked, he and his family boarded the steamer Shamrock for Macau.

(The Shamrock's steward bought some bread from Ah Lum's bakery, as usual...)

The aspect of the Cunning Plan that Yeh and Ah Lum had overlooked was that Indian people also eat bread. The Indian population of Hong Kong tended to breakfast before the British, so when the British got round to breakfast they found their Indian guards, clerks, policemen, etc all seriously ill.

The quantity of arsenic in the bread was far in excess of the fatal dose - everyone who ate it threw up. Most Europeans avoided eating any, but nobody remembered to tell the Governor...who became seriously ill, and whose wife did eventually die of arsenic poisoning.

The crew of the Shamrock and her passengers (including Ah Lum's children) having gone down with arsenic poisoning, Ah Lum was arrested in Macau and sent back to Hong Kong, where he was tried by jury....and acquitted! 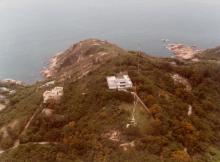