I have found it almost impossible to find information about probable sea routes  to Hong Kong from London in 1867 for a middle class woman travelling alone, going out to marry.

Then.... when her husband died in 1879 she travelled back to London with her 3 children.

Does anyone know the preferred routes for the average traveller in both these years or the most common routes and ports of call and how long the journey would take in 1867 and then in 1879?

The woman's name does not appear on any lists that I can find so I don't know what ships she travelled on, I would just like to get the "best guess" picture of her travel.

It is over-hasty to say that Suez was not an option in 1867. Certainly there was no canal, but in 1840 the overland mail route, pioneered in the 1830s by early, Indian led experiments in steam ship services, had opened up by rail to Italy, ship to Alexandria, canal barge to Cairo and a camel train via posting stations to Suez, whence onward to India and China. Passengers were swift to use the service, set up by Thomas Waghorn's Waghorn & Co. By the late 1840s it was very much the norm for the more affluent, much enhanced when by 1854 a railway connected Alexandria and Cairo, with a full rail service to Suez opening by the end of that decade.

So, by 1867 there was a well-tried, efficient and comparatively swift route (6-8 weeks vis-a-vis 3-4 months), used above all by P&O, that went via Suez and was used probably by 90% of affluent and government paid for travellers. The hook to Hong Kong was usually at Galle in Sri Lanka (Ceylon), which had become P&O's node in 1859.

Ultimately what matters here is what exactly 'middle class' means. The affluent professional middle classes could usually afford the Suez route, which by 1867 was expensive, but not ruinous. Less affluent middle class people, on the other hand, would probably still  have used sailing ships all of which went via the Cape of Good Hope, but which generally did not run on established and timetabled services (wind power is too aleatory). These were primarily cargo ships that carried a few passengers.

It is really important to remember that what we think of as a passenger liner - a ship designed from the get go to carry people - was at a very early stage of development even in the 1860s and passenger lines like P&O were the exception rather than the rule. The majority of ships were designed for general purposes and, primarily, for cargo. If they were put to carrying passengers, the design was adapted but not fundamentally changed. Only the effective triumph of steam, via first the compound (1860s onwards) and then the triple expansion (1880s onwards) engines, began changing this by radically changing the endurance and economics of steam power from the 1870s onwards.

A good source for identifying the more affluent passengers are newspapers, which usually identified those travelling first class. HK newspapers for 1867 are few sadly, however the Singapore newspapers, searchable online via the National Library of Singapore's portal, quite often mention passengers in transit through Singapore for HK, so it is always worth a trawl.

Finally, there were routes via the USA and Canada operating by the late 1860s, though it would have been unusual for any ordinary traveller from Britain to have gone that way.

Long shot, but what are the…

Val, long shot, but what are the names of the woman (maiden and married) and the 3 children?

...forgot to mention. One way of narrowing things down is to have some tighter dates. Since ship movements were tracked by Lloyd's List and the Shipping and Mercantile Gazette (though with inconsistent delays of up to two months in reports), if one had a date of arrival in HK, for example, one could narrow down the ships that arrived in that time bracket from Britain. (That said, less expensive routes would often be made up of stages, for example one ship from London to India, another from India to Singapore, and a third from Singapore to Hong Kong (perm any combination of major ports on the standard routes for other possibilities).) With a shorter list of ships, the possibilities of finding what one is looking for increase.

That, of course, and as eurasian_David points out, is much simplified if one has names.

Yes that's right. I was…

Yes that's right. I was thinking more along the lines of tracking ship movements than passenger lists (which may be non-existent or limited). But I like to have as much data as possible to help triangulate the scenario to as much clarity. If we have dates as well, we can narrow down on tracking ship names and also using the rare instances where a few passenger names are mentioned (albeit first class or other more prominent folks)...where I can track others, they can be used as proxy markers of journey times/routes.

I've managed to track my ggreatgranduncle from London 3rd February 1845 to arrival in Hong Kong on 28th June 1845 and later back to the UK in 1851. Not because of passenger lists - but I managed to find out which ship he got on and from there precisely tracked the ship movements. 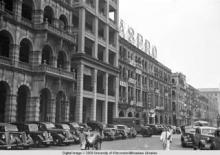