Equipped with modern conveniences, the Hotel Nathan erected at 372-378 Nathan Road in the vicinity of the Po Hing and Majestic Theatres was opened today "will prove quite a boon to Chinese travellers and others seeking quarters with the maximum of comfort and at rates which will appeal to everyone.

The building is of four storeys with a lift serving all floors. The hotel is of similar structure to those on the waterfront near the Western Market. The ground floor consists of a lobby with two cafes on both sides. On the roof a public dancing hall has been laid out. "

The Hotel was demolished in 1965 and replaced with a new and rebranded Nathan Hotel in 1968. Sources: SCMP 27 April 1965 as noted in the Carl Smith Archives and Rating and Valuation Department's "Names of Buildings" for completion date of the new building.

1. Appears that the writer of the article in the Hong Kong Telegraph may be referring to the Sun Kwong/Empress Hotel adjacent to the Western Market.

3.  The Hotel Nathan is mentioned in the Carl Smith Archives here with the year 1924 (?)  given as the completion date of the original building. Unable to determine if it is a transcription error or the land sale occurred in 1924.

Nathan hotel was opened in 1930. The following report says the 5th floor and rooftop of the building was opened as a hotel and playground  but delayed due to some problem with the government building inspector.

The first generation Nathan hotel was closed on April 29 1965. It was rebuilt as a 18-storey building with first floor as a restaurant and mall, 2nd, 3rd floors as tea house and the rest as hotel. It was going to take 3 years.

1967 Astor theater. One can see the Royal Hong Kong Jockey Club betting station on the left and Nathan hotel under reconstruction on the right. 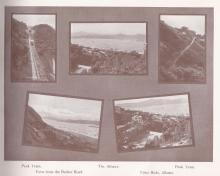