When is this internment going to end? I have another fit of depression when I wonder how I can stick it. I suppose it is largely a matter of food, for the news is excellent and there is no doubt that the war is moving towards the final stages. But I haven’t the energy to get the fun out of life! My legs feel so weak and flabby these days. However, the weather for the last month has been perfect and the garden is coming on well – one of our tomato plants has actually put forth some flowers! Even though it is, as yet, less than a foot high; perhaps I should nip them off; I must enquire. The nights are cool now and we sleep under a blanket. No further news of repatriation.

There is an awful lot of illness about – malaria and a type of dysentery, not a severe type fortunately. Most of the nurses living in the hospital (all the Queen Mary Hospital Sisters are in the hospital as the official nurses) are at present patients themselves. Isa went to the hospital on Monday with a temp of 104.4 and blood tests have shown she has malaria. Her temp is a little lower now.

Yvonne had a letter from Pat Sennett, one page long. At least half of it, the middle portion, had been blacked out by the censor, but the letter ended by saying, “Tell John I hope to meet him soon”.

We are hoping somehow to cheat the censor, but so far our efforts have not met with much success. We feel the blacked out portion may say something about repatriation. There is a snag, however, and that is that the letter is dated last November, at least 6 months earlier than the first official Japanese announcement about the repatriation of women and children – so I’m afraid the news won’t be of much use even if we do manage to decipher it.

I have started on the road to toothlessness. Eight days ago one of my teeth was very tender (it was the one Shields had re-stopped some months ago) and so I paid Sammy Shields a visit. He said it had the symptoms of a tooth with an abcess at the roots, but with out an Xray he could not tell. But he said that in any case the tooth hadn’t much longer to live and advised its removal. I was loathe to part with it, but decided it would be for the best and so that morning, I finally cleaned it for the last time and bade it a fond farewell. As it turned out, there was no abcess there, but no doubt it was better for my other teeth to have it out. There is nothing hard to chew in our food here – except, occasionally, little pieces of toughish meat – so my recovery has been quite rapid.

Two days ago we all had our ¼ lb lard and ¼ lb peanuts, which were very welcome. These came from the Welfare, i.e. Red X.  We are going to grind the peanuts into peanut butter. I have planted some in my garden, though I believe Feb or March is really the time to plant them. I wonder why peanuts are not grown in England ? I am sure they would do quite well, for N. China is the home of the ground nut. We can’t plant the lard unfortunately. 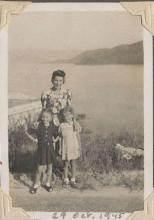