ON the anniversary of VJ Day I posted a brief article about my family who were interned in Shanghai. I have copied it below:

75 years ago today I expect my grandparents heard the incredible news of the bombing of Hiroshima and Nagasaki by the Americans which brought about the end of their war. All my grandparents and their children were interned in Shanghai (in Chapei Camp) where there were 6 civilian camps.

They endured all kinds of incredible hardships whilst in the camp. My mother and father, who were children, met in camp. They formed a bond which lead to them getting married in Hong Kong in 1952.

I have been trying to learn more about their time in camp. Sadly both my parents have passed away now. When my brother and I were growing up, they told us of their time in camp, with almost fond memories. But I do know that they and their families suffered all sorts of depravity and cruelty.

I know that, for example, my grandfather was struck by the flat side of a Japanese soldier's sword, across the side of his head. His crime... he came out of his hut after curfew to read his bible. The heat in their living quarters that night, was unbearable. He was permanently deafened, and had to be nursed in the infirmary for months.

I have also read a very chilling account of the day the Japanese guards all left the camp, presumably very close to today's date. The prisoners went through the Commandant's papers and found a document/letter. It was from the Japanese High Command and was presumably in answer to an enquiry from the Commandant. It simply said, that 'they' understood that he was running out of food and instructed him to simply kill all of the prisoners if he could no longer feed them!!

Luckily for all of those prisoners, the surrender came and so began the next phase of their incredible lives.

Apologies to anyone on Facebook who may have already read this. As I said in the article, I am researching my family's time in Shanghai, but this is relevant here because my parents spent their entire working lives in Hong Kong.

My mother was born in Hong Kong. My parents were married at Christchurch on Waterloo Rd in September 1952 and my brother was born in Kowloon Hospital in 1958. My Mum died in QE hospital in 2012 having spent her last 2 years in The China Coast Community.

The photo taken below shows my Aunt (2nd from the right) on board HMS Belfast which had been deployed to Shanghai to bring back civilians who had been interned there.

I found a fascinating document which was written by Carl Mydans whilst he was interned in Chapei Camp in Shanghai.

Greg Leck, author of "Captives of Empire" was able to tell me more about Mydans. Please see below:

His name was Carl MYDANS.  Photographer for Life Magazine.  Wife was Shelly Mydans.  Was interned in the Philippines along with Russell Brines, another correspondent.  Accepted the Japanese offer to go to Shanghai on the Maya Maru, thinking (correctly) their chances of repatriation would be better.  Was free in Shanghai until internment started in March 1943. Interned in Chapei along with several others from Manila.  (Tsurumi, the commandant, had been the commandant of Santo Tomas in Manila)  Repatriated on the Teia Maru / MS Gripsholm.  Got photos of the ship and repatriates in Goa and they were published in Life Magazine.

Wrote a book which includes stories related to this time.  Was sympathetic to Buddy Uno, American Nisei who turned his back on American and worked for the Japanese Army Press Bureau.

The Assembly Times was a newspaper published in Chapei Camp.  It ended after the September 1943 departure of the repatriates.  There had been a newspaper, Internews, published in Santo Tomas Internment Camp in Manila when the Mydans and Brines were there.  That one, too, eventually ceased.

The extract contains an announcement about an event which was scheduled to take place On May 25th in the "East Shed"... a musical event. My father, Alan Bailey, then aged 16 is listed as one of the performers!

Hi - my parents were also in Chapei, they met there while in their 20s and married on 10 Nov 1945 in the Anglican cathedral in Shanghai. - I have 2 siblings and we recall the stories and anecdotes they told about their  life in Shanghai, esp re Chapei life. For instance my mother mentioned the crates parachuted  by the USAAF containing stores and medicines - also choclolate, that nearly hit her french class while they had outdoor lessons, Mum was a teacher's aid in camp - as she spoke fluent French having attended the primary school in the French concession when she was a girl. She was born on a ship in HK harbour  (1922)- her mother was a Russian refugee who fetched up in Shanghai, where my mother subsequently lived until her marriage to my Dad - a Dutchman.

After the war, neither of  my parents spoke disparagingly or accusingly  of the Japanese camp commndant - they said he was a humane man - a member of the Japanese consular service, not a military authority. The guards operated according to a strict rule, 'policed' as best they could be by the Red Cross. During the last year of the war there were extreme food shortages all around - even the much loathed 'cracked' wheat was in short supply! However the commandant did as much he was able to ensure that the ever dwindling supplies were fairly and evenly distributed among the various nationalities in the camp  - ca 86 Dutch and ca 200 US nationals, as well as a large contingent of British  (cf Greg Leck's tables...) 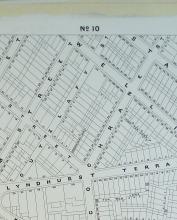