It was described in the recent AMO review of listed buildings, ref. 597:

The plot of land located at No. 64 Kennedy Road was originally owned by Ho Sau-hong (何壽康) who bought the land in 1905. The site was sold in 1924 to a woman named Wong Yik-mui (黃亦梅), the wife of Ngan Shing-kwan (顏成坤). It is not known whether the building was built before or after 1924.

No. 64 was the site of the private residence of the Ngan family for decades. During the period of Japanese Occupation (1941-1945), the building remained vacant for some time.

Ngan Shing Kwan was for many years the Chairman and Managing Director of The China Motor Bus Co., Ltd. (中華汽車有限公司, “the CMB”). In 1933, he joined hands with his father-in-law Wong Wong-choi (黃旺財) and Liu Po-shan (廖寶珊) to found the CMB. Ngan had a long and distinguished record of public service that earned him a JP, an OBE and a CBE.

The house is a three-storey building constructed on a series of platforms.
The style of the building is Italianate Renaissance. The most distinctive
feature of the house is the octagonal turret tower at the north-east corner. The tower has an ogee shaped roof with a lantern shaped ventilator at the apex. The tower compliments the building’s other classical features such as the coupled Doric columns and entablature along the front verandah. The building also displays Art Deco features in the ornamental ironwork of the railings and the balustrading to the verandahs and balconies and the curved staircase at the south-west corner. There are traces of oriental influence in the ornamental lanterns on top of the posts to the verandah balustrades.

The architectural features of this house described above are rarely found in other private residences. The house is therefore considered to have built heritage value. Some alterations such as mosaic tiling are evident on the verandahs and a modern lift has been installed providing access from the main gate to upper floors. Internally the extent of alterations is not known.

The house represents the social status and affluence of the Ngan family as they became more successful and influential. Once it was one of many such luxurious houses along Kennedy Road, but now most of the nearby buildings have been redeveloped. The most contrasting new building is the circular office tower block, Hopewell Centre. The building therefore represents a link with the past which will be obliterated if it too is demolished.

No. 64 Kennedy Road connects with other residential villas in the same
street; for example, the old residence of Mr. Li Koon-chun (李冠春) at Nos. 6 and 8 Kennedy Road (not yet graded) and the Sebourne Villas No. 1 at No.28 Kennedy Road.

It is difficult to suggest an adaptive re-use for the building as the interior
floor plans are not known. It appears to have a large garden which would be useful. Perhaps a re-use related to cultural activities with exhibitions and displays would be appropriate.

No. 64 Kennedy Road was accorded a Grade III status by the Antiquities
Advisory Board in 2005 in view of its historical and architectural merit. 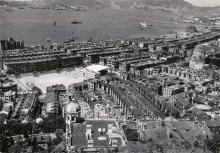 I did some more research and posted a few more images of it here:

As far as i know, these are the only pictures of its interior. Took these a couple days ago.

Thanks for sharing!  The photos are amazing.  It is a pity that family members do not treasure the old photos and relics in the house, as it appears that the house had no visitors for some time.  What are those stacks of papers seemingly in plastic bags?  Are they documents or magazines?

Does anybody actually reside there?. it looks like there is food in the fridge?

I didnt check, not sure the

I didnt check, not sure the contents of those plastic wrapped mags or books. The mansion had a'lot of dust build up but was quite was well preserved. Maybe the security guard cooks his meals in that 2nd floor kitchen which can be accessed directly from the outside through a padlocked door near his post without needing him go through the mansion itself.

Hi! I'm doing some research on old HK buildings, but the Flickr link you posted for 64 kennedy road isn't working:

I wonder if you still have those? would love to see!