OBJECTIVE: The objective of the first American air raid on Canton is to bomb Japanese aircraft on the ground at Tien Ho airfield

AMERICAN UNITS AND AIRCRAFT: Four B-25s from the 11th Bomb Squadron (341st Medium Bomb Group, 10th Air Force) and four P-40s from the American Volunteer Group (AVG).  This is the final mission flown by the AVG, which has become famous as the “Flying Tigers” under the command of Col. Claire Chennault.  At midnight on July 4, the unit is disbanded and immediately reconstituted as the China Air Task Force (CATF) of the 10th Air Force.  While still under the command of the newly promoted Brigadier General Chennault, the majority of the civilian volunteer pilots and ground crew from the Flying Tigers choose to return to the United States.  USAAF replacement pilots, ground crew, and support staff rotate in to take their place.

RESULTS: Several Japanese aircraft are hit by bombs on the ground at Tien Ho, including one twin-engine bomber

JAPANESE UNITS, AIRCRAFT, AND PILOTS: 15-20 Japanese aircraft are spotted on the ground at Tien Ho.  However, Japanese fighters do not intercept the B-25s.

SOURCES: Original 11th Bomb Squadron mission report in the Air Force Historical Research Agency archives at Maxwell Air Force Base in Montgomery, Alabama.  I do not, however, have the mission report for the AVG P-40s, which may have encountered enemy fighters.

The Asama Maru pulls anchor at 10 a.m. and gets to the mouth of the Mekong at 3 p.m. It's low tide, the ship can't get past a sand bar so turns back upstream and anchors. The passengers are worried: they spend the next few hours debating the situation, and some people fear a return to internment. At 6 p.m., to general relief, the ship pulls anchor, crosses the sand bar, and heads out into the open sea.

So, after a frightening three hours, the Americans resume their progress towards home. Life remains hard in Stanley, although at least there's more space now. But things are getting tougher for the British left behind in town as conditions deteriorate.

The largest uninterned group consists of bankers, and they've been running great risks raising funds to provide medical and welfare provision for the camps but now they too need financial help. Today D. C. Edmondston, Hong Kong Manager of the HKSBC, writes to Lindsay Ride (head of the British Army Aid Group, a resistance organisation):

...18 men, 10 women and 19 children guests in {Sun Wah} hotel. £6,000...should be enough if spread over six monthly payments to look after all Bank people and dependants, further funds required by Government and other internees in Stanley...Food stocks declining, prices high and rising.

See also entry for July 2. By July 1942 the BAAG are in contact both with the internees and the Allied civilians left in Hong Kong.

Not much reason to think that this is a holiday for us. ((Independence Day in the U.S.))

We did have some excitement. We hit a sand bar and had to go back up river and wait for high tide.

The scenery is beautiful.

American Independence Day. If Roosevelt’s promise is true we should be hearing some heartening news very soon.

Didn’t hear Hill’s baking efforts this am. ((Believed to be F. N. Hill)) Thoughts of all sorts of things kept me awake until the early hours of this morning so I was fast asleep by the time he got started.

$75 parcels being distributed at last, but they are by no means satisfactory. Oats full of weavils [sic] & chocolate mouldy & the value of total goods $52.50, $22.50 dis-counted for big notes. However, as the goods are gratis (at present) we must be satisfied.

Had lovely eats with Steve, sausage & bacon & some real cocoa. ((We think this was E. J. Stevens)) 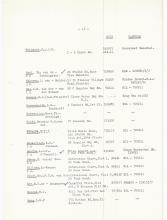