Some months ago a man named RANDALL of the Hongkong Telephone Company, who was a strong swimmer, attempted to escape by swimming, but on coming ashore was caught, beaten up and sentenced to 3 years' imprisonment.

Hyde states and I quote:

"Kennedy-Skipton left here on the 24th and s'pose he is your worry now. He is a stupid "tammy" ((spelling?)) but make no mistake about it he did a great many people a lot of harm since the surrender. He willingly co-operated with the enemy when there was no necessity to do so and put into their minds many ways of getting a great deal of money, which they did in the form of back crown rents and such like taxes which they might not have thought of. Night and all of us here think alike on this subject. He is a man who thought that things would never be as they are now and had his silly eye on the main chance."

If confirmation is required of the report already forwarded to the effect that our agents have had great difficulty in persuading Free Europeans to allow themselves to be escorted to safety by members of our organisation the following quotation will no doubt convince them:

"At the time of going to press I am unable to get anyone to go with 'J'. although I know a few useful men who are more or less free. God knows what keeps them there." "Give me the chance they get and I'd be out of this hell hole in two shakes."

I would add that Mr. Hyde has since had more luck and two Europeans are reported to be accompanying 'J' and have safely reached tamshui to-day. 'J' is a Russian radio expert who was sent to Hong Kong by the Admiralty to set up some special Radio sets in the M.T.B's. He is reported by Hyde to have connection or branch office in Chungking.

I hope he will prove to be a useful asset. The Japanese have been making strenuous efforts to induce 'J' to work for them and have previously refused his application to leave Hongkong.

The following message has been received from Sir Vandeleur Grayburn: 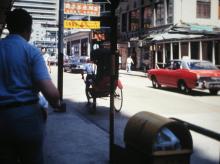