We now have a bench at office, room for many on it.  ((Up to then, there were only chairs for the 2 stewards and us stenos; with the bench, some of the doctors could have tiffin in the office.))

Mrs. Braude has sent Mabel a litle bit of margerine and a TIN OF JAM - so terribly generous of her.  ((Irene Braude, the head of the VADs.   She looked after her toddler daughter Patricia, her mother Mrs. Deacon whose husband had died in camp April 1942, and also little Jean Addis Martin whose mother (a VAD officer) had died in 1941.  Jean's Dad Mr T. Addis Martin was in camp in a different billet.   Mabel used to take Patricia and Jean and little Bill Owen out for walks most mornings, and make clothes for them.))

1,000 tons of comfort kits (for Bri prisoners in HK) on board Kamakura Maru

Last day of September. We have been in this camp for over 8 months now. The paper today announces that the Kamakura Maru, the Japanese ship which returned from Lorenco Marques with Japanese nationals, is due to call at Hong Kong on 2nd October where it will unload about 1,000 tons of parcels and comfits for British prisoners of war. I wonder what that means! Does it mean that all that amount of stuff is for HK or is most of it to be transhipped in smaller vessels to Shanghai? Also, does it mean tons weight or tons displacement? If it is all for HK where there are about 15,000 European, Canadian, American etc. prisoners, it means we should average about 150 lbs each! What a hope!! But it would be lovely if we got a few letters from people at home. All packages will be carefully censored, so it will probably be some time before we hear anything about them. The Bidwell’s, with the 100 lucky other people who have permission to go to Shanghai, are now very excited, because it is quite possibly that they may embark on the Kamakura Maru: they have heard they may be departing very soon.

Last night I went to the first meeting and practice of the newly formed male voice choir. Mrs Elizabeth Drown is, apparently, the instigator of the idea. I was a little bit late so am not sure of the aims of this choir, but I gather it is being formed to produce something for the Christmas celebrations - horrible idea! (not wishing still to be interned by then.) That something is Canterbury Pilgrims (or Tales), who the author is I do not yet know - in fact I seem a bit vague! Any way, about 30-35 men turned up; one tenor, about 5 baritones and the rest bass baritones or basses. About 5 or 6 sheets of music, the prologue, which Betty Drown had laboriously copied out, were distributed.

The tenor and light baritones crowded round one and the rest divided into groups of 5 or 6 and tried to read the pencil written sheets. Any way, we got going and I was quite surprised at the number of men who seem quite able to read music after a fashion. I was fortunate enough to have a sheet of music given to me and I kept a firm hold on it! I found Mansell, an overseer in our office, grasping the other corner and various other gentlemen behind breathing down my neck and bellowing in my ear. Mansell has a lusty voice with plenty of volume, if not much tone, and inspired by his example, when we imagined he had roughly the hang of the bass part, we let fly to some effect: we drowned the other basses, we drowned the tenors, and we drowned the piano! That was the trouble, we made so much noise that we did not know if we were in time and invariably reached the end first! Well, perhaps I exaggerate a little. However, what I heard of the harmony certainly sounded very pleasing and I like the music very much. What little we have seen of it seems simple and melodious.

We had only the two parts too. Betty Drown is going to try and get all the little boys together for the sopranos and I suggested that some of the older boys and perhaps one or two men will be able to sing contralto. I know that the two or three contraltos in the Temple choir were men. Anyway, it looks as though it is going to be good fun. There are several more tenors in camp who can be pressed in. I think too that the number of basses should be reduced, though I hope I should not be one of those to go!

Yesterday morning Y and I had a great thrill. We had been told that a parcel had arrived for a Mrs Charter, so Y went up the hill to collect it! On returning we found it contained some of our own clothes! Aileen Stevens, a friend of Devaux, had obtained permission to leave camp and live in town and we asked her, if possible, to look through the one box containing some of our clothes that Devaux had kindly taken into his custody. The parcel contained two silk dresses, a summer playsuit and some summer slacks for Yvonne, and my crimson silk dressing gown! I’m afraid the box contained only odds and ends of summer clothing; nothing so useful as shoes or warm winter clothes. However, everything is more than welcome here. Y, has been very lucky with dresses here: she has had about 5 given to her. Now she can give some away again to more needy cases.

Yesterday too, most of us signed a paper written by Dr Smalley and addressed to the Hon. C.S.  It contained an appeal that he should endeavour to contact the Home Govt through the I.R.C. and press for our repatriation. The desirability for this was based almost entirely on medical considerations and the question of food supply, mentioning also overcrowded conditions, lack of adequate clothing, shoes etc. It stated that most people survived last winter chiefly because of the reserve of strength they had built up during previous months of proper feeding. This winter we shall have no such reserve and the position will be more serious. Dr Smalley also said that it took years for Europeans, unused to a rice diet, to adjust their digestive organs so as to assimilate more than a small amount of rice, so it will be a very grave matter if the Japanese reduce or stop our flour ration (as they have informed us may be necessary because the stocks of flour are nearly exhausted) and give us a corresponding increase of rice. I don’t know what effect this will have on the C.S. His avowed policy is to do nothing that will embarrass the Home Govt, which is very sound; at the same time, if nothing is forthcoming from this end the Home Govt. may assume that conditions here are fairly good and allow internees here to suffer hardships and deaths that they would not permit if they were informed. But I believe the C.S. has already informed the Japanese authorities that he would like all women, children and aged and infirm to be repatriated. Well, if that were achieved it would be a good thing, for there are many old people here who I am sure will not survive another winter.

Petition re repatriation going the rounds for signatures.

Well I eventually came in a week ago today and I'm feeling a lot better.  I have a small bottle of milk every day and I'm eating extra meat and now sardines.  I get an iron tonic and now I've started on Hepetex.  I've already paid H$60 to get some Hepetex injections but they haven't come yet.  I think I'll soon pull up though I feel a bit tired today. 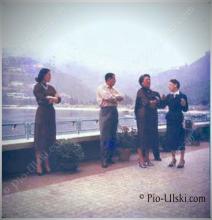